Jessica McCarthy (email) joined the Cathedral staff in 2022. In her early years, Jess was a Chorister at the Washington National Cathedral and sang in the Children’s Chorus of Washington (CCW). These musical opportunities led her to New York and South Africa on tour, and has allowed her to sing at prestigious venues such as the Kennedy Center, Washington Smithsonian's, the Peace Corps, Wolf Trap, and various churches across the nation. Jess previously worked as a teacher-assistant at the Sheridan School in Washington DC and ran a private tutoring company.

Jess is currently studying at the Chicago College of Performing Arts seeking her double degree in Music Education and Vocal performance. During her time there, she has been Stage Manager for the Junior/ Senior Opera and performed at the Chicago Symphony Center.
Originally from London, England, Jess currently resides in downtown Chicago and is excited for her internship! 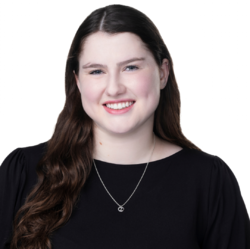