The St. James Cathedral Choir is one of Chicago's finest liturgical ensembles. Comprised of 16 professional singers and 16 auditioned volunteers, the cathedral choir sings the 11 a.m. Choral Eucharist every Sunday, Evensong monthly, and special occasions throughout the year. The choir has also toured and has been featured on WFMT radio.

St. James has long been recognized for excellence and leadership in sacred music. When it was founded, the church established what was to become one of the most well-known choirs of men and boys. In 1926, that gave way to an adult choir of mixed voices. Several leaders of American church music have led the music program at St. James, including Dudley Buck, Peter Lutkin, Clarence Dickinson, and Leo Sowerby, considered to be the “Dean of American church music” for his influential compositions. The choir's musical identity is grounded in an expansive Anglican choral tradition, with a repertoire encompassing music from seven centuries while striving to include those voices who have previously been overlooked.

By the waters of Babylon

As for our harps, we hanged them up... How shall we sing the Lord's song in a strange land?

The St. James Cathedral Choir became a virtual ensemble during 2020-21, each voice recording at home in isolation due to the Covid-19 pandemic. This album contains music written specifically for virtual choir by Director of Music Stephen Buzard. Each piece employs looping, layering, aleatory, phasing, and other effects that would not be possible in person.

St. James Cathedral Choir · By the waters of Babylon 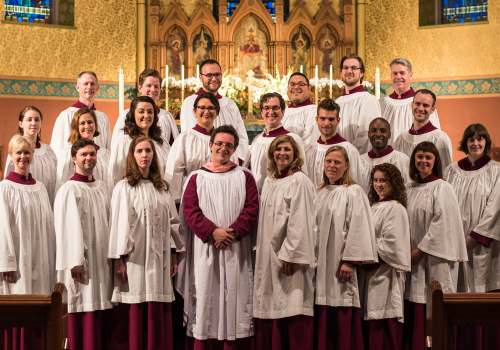