Leadership Transition for Summer in the City 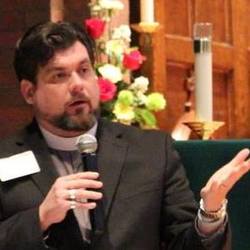 An announcement from the Rev. Canon Lisa Hackney-James, Sub-Dean

After eight years of dynamic and generous leadership, the Rev. Ed Bird is stepping down from his role as Executive Director of Summer in the City. In the Spring of 2017, Fr. Ed took on a new challenge by accepting a call to serve as full-time Interim Rector at St. Paul’s Episcopal Church in DeKalb, Illinois, a community that lies 70 miles west of Chicago.  We were very grateful for Ed’s willingness to stay in leadership for the 2017 camp. But that experience confirmed for Ed, and for the rest of the leadership team, that the distance was simply too large a factor to overcome, and that we must now find a new way of carrying forward the work of this lively and vital cathedral ministry.

Ed’s journey with the cathedral’s signature three-week summer cultural immersion camp began in 2010 while serving as the cathedral’s seminarian intern. Ed’s leadership grew over the years, eventually taking the reins as Executive Director in 2012. Since that time, Ed has put his own stamp on the program, growing its partnerships with other Episcopal churches in Chicago, and heavily emphasizing the importance of building the relational culture of the SITC “family” and the mentoring of campers into leaders.

Over the past 18 months, a SITC Administrative Team, comprised of myself, Senior Warden Timm Holt, Canon for Administration and Finance Robert Black, and parishioners David and Georgia Nelson, Andrew Long and Claire Brooks, has supported Fr. Ed and worked on plans to sharpen the program’s focus and expand its reach. The Dean has appointed Claire Brooks to head this Administrative Team and to form a Search Committee to identify new leadership for Summer in the City. The post will be advertised in St. James e-news and diocesan communications, and we aim to recommend new leadership to the Dean and Chapter by the end of this calendar year. We will keep the cathedral community updated as our process unfolds.

The Rev. Canon Lisa Hackney-James
Sub-Dean of the Cathedral